Now would probably be a great time to update, as I sit here on the couch trying to ignore the insane urge to itch. But I’ll get to that…

It’s been a while since my last update. Overall, Colleen is doing well. After her last gastroenterologist appointment, we’ve been getting her on a small dose of miralax everyday. This keeps all things functioning well in the belly and we have a very happy little girl for it!

She has her kindergarten transition date meeting scheduled in May and so I was happy to see a lot of her current therapists planning on attending. With their knowledge, I have no doubt that we’ll get her everything she needs to get progressing. I also really want to find out if they offer music therapy, as I think that would be extremely beneficial to her. Girl loves her some music. Any kind. Even my wails on the violin.

Last weekend she got to go to two birthday parties; one for her cousin Mia, and one for a school friend. Colleen absolutely loved the little ball pit my sister had out. She skipped her early afternoon nap of course, so she seemed tired throughout the party, but still a happy camper overall! 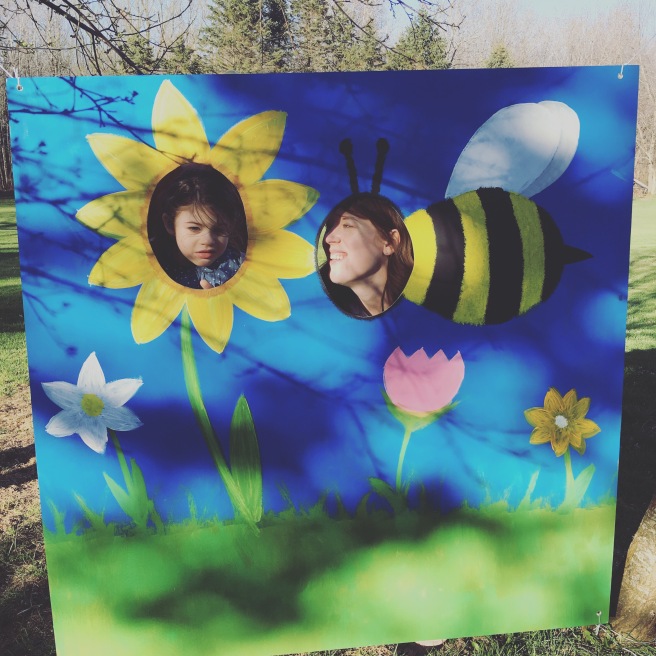 Sunday was her school friend’s party. It was at MyGym and I must say I was very happy with them. They helped Colleen sign happy birthday to her friend, and after zip lining, they took out a little seat so she could take a turn as well.

Nap may have also been skipped prior to this party as well. 🙂

After such a full weekend, I was normal at all excited to go back to work Monday. Can we have an extra weekend day please? During the day, I noticed some red on my face, but I attributed it to that lovely monthly. Later that night I put Colleen to bad and noticed I also had a rash starting along my upper chest. Panick ensued. Whatever this is can’t get spread to Colleen!

I went to urgent care early Tuesday only to be met with the hand to chin and squinty eye look as the doctor tries to figure it out. No ideas from them. Just prescribed some lovely steroids to help with the rash and to take an antihistamine.

At this point, it’s not better and spread some more. Trip to my primary lead to more “I don’t knows.” And “let me know if it gets worse.” It was worse, which was why I was there. Two antihistamines now and I’m almost done with the steroid pack.

Hoping this weekend will help. There is absolutely nothing new that I bought and used. Everything I use is what I’ve had. Frustrating but it might take a while to get in to see an allergist.

Haven’t worked out in almost a week. Minus the hot bath Monday night, working out was a very bad decision, so I’ll have to concentrate on nutrition over exercise.